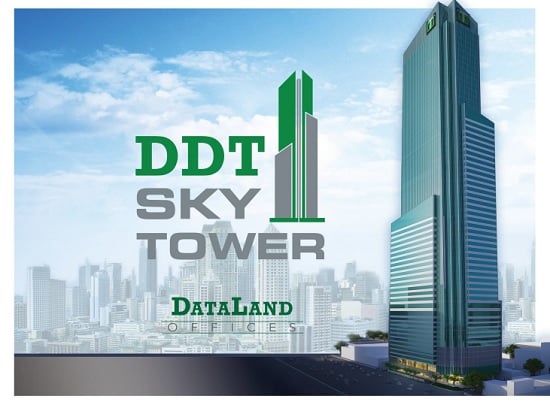 Watch out for the rise of an iconic office tower set to make the skyline of Quezon City brighter than ever. Introducing the DataLand Inc.’s DDT Sky Tower rising along EDSA in Quezon City near the broadcasting giants ABS-CBN and GMA-7 and just a few meters away from Quezon Avenue.

The DDT Sky Tower is expected to redefine the way office buildings are designed and built in the country’s largest city where several industries, IT centers, and other businesses, had already established their strong presence. DataLand has launched its flagship office building project in the second week of June 2019 at the Shangri-La Hotel.

The DDT Sky Tower Quezon City, situated on more than 5,000 sqm of prime commercial land, is a 60-story single tower poised to become the tallest and greenest building to be erected along EDSA in Quezon City, which “affirms DataLand’s continuing efforts to raise the bar of quality offerings in Philippine real estate development.

DDT Sky Tower is primarily designed as an office building for sale or lease in Quezon City that will also have commercial spaces (shops and retail areas), food court, green features, and outstanding amenities. These breathtaking features of DDT Sky Tower will let companies have a high-quality standard of work environments amid a structure of ‘grandeur and magnificence’. The tower aims to serve as a home to more successful BPOs and other corporate offices in the Philippines. Moreover, the office tower is primarily master-planned to support IT-based operations, which is assured to give rise to more employment opportunities and a dynamic economy.

The DDT Sky Tower is located along EDSA, South Triangle, Quezon City. The South Triangle is part of Quezon City’s Triangle Park, one of the city’s emerging central business districts that could rival the CBD of Makati, Taguig (BGC), the Ortigas Center, and other major financial and commercial centers across Metro Manila.

Aside from the ABS-CBN Broadcasting Center, you can find around the office tower some of the city’s key establishments (like the Providence Hospital, the Eton Centris, the Wil Tower Mall, GMA-7, and the EDSA-Quezon Avenue Jeepney Station Westbound, among others). However, the property still possesses the tranquility and serenity of its neighborhood despite being located in a busy thoroughfare. Moreover, the DDT Sky Tower is designed to keep the life of its employees more private and exclusive because of its seclusion from the noise and pollution of the city. As this prestigious property is built to mimic a quiet ambiance, the feeling of exclusivity is outstanding.

Although the DDT Sky Tower is DataLand’s flagship project for an office tower, the company is not new in property development. The company, backed by the DDT Group, “aims to develop various projects into commercially-viable, progressive, and highly livable developments’. To make the company’s major projects safer and yet with admirable designs without the high price tag, the company taps in the services of DDT Konstruct, Inc. (DDTKI) as its exclusive contractor. DDTKI has a 20-year track record in the industry and was awarded as a Quadruple ‘A’ construction company.

Some of DataLand’s other projects are the mixed-use Olive Place Shaw Mandaluyong, The Silk Residences Manila, the Ivywall Hotel Puerto Princesa, the Miren Enclaves Palawan, and MyCube Residences Laguna, among others.

DataLand DDT Sky Tower in Quezon City, Philippines is a premier Office project available for sale. If you're looking to rent or purchase DDT Sky Tower, then check here first. We have full details of DDT Sky Tower updated regularly as well as everything you need to know about the availing and booking process, broken down into stages that includes selecting a unit, choosing a payment plan and buying your dream home at the right price. For price list, free site tripping or showroom visit, personalized service, model house, unit plans, floor plans, payment terms, CHAT LIVE with an agent 24x7. Always only buy from PRC licensed Real Estate Brokers and Agents.